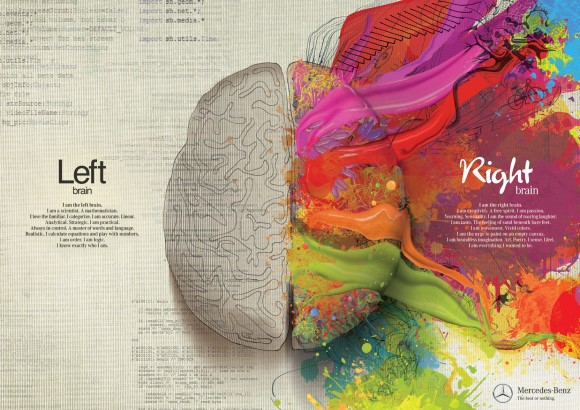 I went to university for Political Science, it’s no secret (it’s on my LinkedIn profile). I actually went to university to study Biology, until I took biology 101 (yawn), that changed and I wanted to study Architecture. It is very likely that I would have studied Architecture had I not stumbled upon Political Science along the way. Now I work full time as a computer programmer. Weird.

What does this all have to do with the left brain/right brain? Some people are clearly defined as left or right brained. You can tell nearly instantly after meeting them, sometimes before meeting them (depending on how crazy their dress attire is). There are the free spirit artsy types and then there are the mathematical types. I’ve never been tested, per say, but I am fairly confident that I fit right dab in the middle. I am completely comfortable spending hours sketching free form designs or coding systematic (sometimes complex) algorithms.

While studying Political Science I had this professor who loved to make his classes increasingly more difficult. As we got better, his marking got harder. I got to know how most of my professors marked papers and tests. It wasn’t hard to know what level of work was needed to get good grades. But this one professor was impossible to crack. It wasn’t until my last year in University that I was complaining to a friend about how my professor marks his papers. We had an in class essay coming up and I ended the conversation by saying, “This time I am going to prepare so that I get 100% on this paper, and if I don’t get 90% I will know that this professor is biased.” Turns out that my professor was standing behind me the entire conversation and my friend thought it was hilarious to sit back and watch. I felt like an idiot, “great”, I thought, “He’s gonna fail me.”

What does this have to do with left brain/right brain? I’m getting to it.

In my first year of University I had an awakening moment, spending most of my prior schooling days, listening to the teacher and doing nothing else I had formed a terrible study ethic. In high-school I hadn’t needed a better one to get good grades. University turns out to take more work than just listening. So much information was being thrown at us, that by the end of the semester I was finding it less than easy to recall specific details from the beginning, I hadn’t even opened any of my expensive text books yet. Tests on theory were still easy, but I was bombing anything that required detailed memorization. By the end of the second semester I started getting depressed. Unbeknownst to me at the time, a huge part of my identity lay in people telling me I was intelligent. (Probably not a good idea to have your identity in this). Getting bad grades was like having someone constantly yell at me, “You’re not who you think you are.”

By the end of the year I spent all my spare time drawing cartoons, playing guitar, and writing. Now that I think about it, all very right brain things. I was desperately trying to find happiness in a very unhappy time and trying to avoid the seemingly inevitable. Failure. Finally it happened, I took a Political Science 101 course and I failed. My professor failed me. I couldn’t believe what just happened.

Four years later. I am long over my bad study habits. I am working as hard as I possibly can at school and it is showing. But I am frustrated that there is one class that I can’t crack. (You guessed it, this is the one and the same professor who failed me four years prior). I am overstudying for every class. I am exhausted. By the time I actually get to reading the required material for the exam I realize that I have to cram 6 extremely technical papers on International Law in just one night. Not impossible. I go to my study group. Everyone is talking about the papers and I realize that I don’t know nearly enough. I just listen, give a few thoughts, mostly listen. Go home and read. Go to class in the morning. It’s 8am, I start writing.

2 weeks later we are in class and our professor hands back our papers. I am hoping to get a passing grade. As he is handing out the papers he says, “I would like everyone to hear how to write a proper in class essay. I would like Jonathan,” he turns and looks at me, “to please read his paper to the class, and then I would like Dan to read his.” Shocked is an understatement. I was actually terrified. I couldn’t remember what I wrote, I couldn’t remember how I wrote it, my grammar was probably terrible, now I have to read it aloud to everyone in the class. After I had read the paper my friend sitting beside me (the friend from before) turned to me and said, “Wow.” Turns out I received 90%. Which in this guy’s class was a big deal. While some people thought I had written this masterpiece, I honestly didn’t think I had written a great paper at all.

The next day I had an epiphany, it’s all about perception. What we perceive to be intelligence is exactly that, based on our perception. When my professor had overheard my conversation I had singled myself out to him, accidentally, as this hard working student who was used to getting good grades. He forgave my comments about him being biased apparently. Suddenly his perception of me was different. When he singled me out to the class, they perceived me as intelligent. My paper could have been adequate at best, but the praise of my prof gave it credibility. It all came together. Getting good grades in junior and high school was easy, not because I was brilliant, but because each year the teachers had seen me rise to accept awards, they perceived me as intelligent and graded me accordingly. I came to a conclusion. If I could come back from near failing grades to being perceived as this high performing intelligent student, anyone could. However, it is difficult, it takes work. Why? Because we have to work twice as hard. We not only have to earn good marks, we also have to convince people along the way that we are intelligent, we have to convince them to change their perception of us.

I’ll end with this, I think that the left brain and right brain focus on what they are good at, logic and abstract thinking. But I also think that we focus too much on putting people into boxes, either left or right brained. We say genius lives here, or the aloof lives there. I think genius is merely the left meeting the right. The phenomenon when our left logical brain is confused by something and our right abstract brain kicks in and looks in wonder at the person who solves it, and we conclude, they must be a genius. It’s perception.

2 replies on “When left meets right”

Nice post. I learn something new and challenging on websites I stumbleupon everyday.
It will always be helpful to read through content
from other authors and use something from their sites.