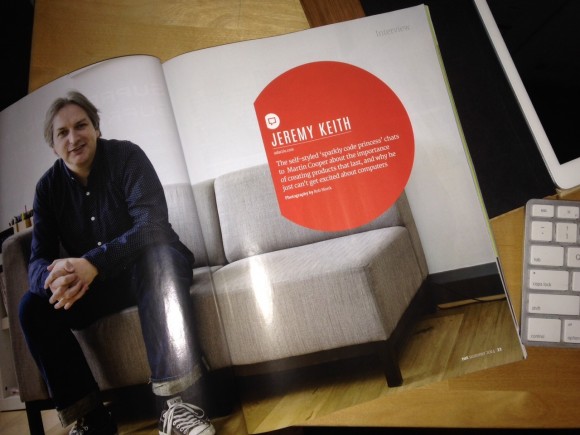 Jeremy was right. The web is a run by a simple idea. Why then is it made to seem so complicated? There’s this weird juxtaposition in tech culture. On one hand it’s a very open community. With amazing people making themselves available to mentor others and share their insights and knowledge. On the other hand their exists a very real under current of anxiety, fear and even quiet disapproval among the halls of creators and decision makers. You can hear it in the articles criticizing the tech leaders for not pushing boundaries further or even amongst the panels of judges presiding over startup pitches.

There exists this insatiable thirst for more technology, more disruption, more excitement. The very essence of what makes the web great is now considered outdated. The outcome is a developing sense of insecurity amongst startups that they need to conform to these demands to be perceived as successful but are afraid they may fail because they are unsure of how to address their target market in way to do so. When one gets caught up in that whirlwind it’s easy to lose sight of the simpleness of the web. This paradox could be compared to the Top 40 song list asking for the next music revolution to disrupt sound.

While one could argue all businesses are influenced by outside industry players. Think business leaders striving to be featured on Forbes, Times and Inc. Tech is being influenced from within, by it’s own community of incubators, tech columnists and industry leaders.

That got me thinking. If the competitions and social channels of tech culture are so influential internally, what else is it influencing and why does so much of what is being said sound the same?

The internet is born and this neat ecosystem emerges fuelled by the ability to create, share and learn. And then came gamification. Gamification is when sites add ratings, likes, scores and achievements to applications to make them more engaging. We’ve all seen the Facebook likes, social status, profile completion bar, and the rest. The outcome is that some content creation, especially on social media, has developed into winning the praise of others rather than being about the joy of simply creating or sharing your passion with others. Don’t get me wrong, I really enjoying seeing what the community posts, the adventures of my friends and family, and even reading random articles about the “12 actors who disappeared into the abyss”. And wondering, “oh right, what happened to that guy?”

What is uncool is the not so subtle suggestion to post content that gets liked and how that ever present manipulation may effect our creativity. So if these posts are being influenced by Gamification, is that okay? And perhaps this really cool and basic idea of the web, a place where anyone in the world can create content and share it with others, is gradually being replaced with a different idea. One called Social Proof.

According to Wikipedia, “Social proof is a type of conformity. When a person is in a situation where they are unsure of the correct way to behave, they will often look to others for cues concerning the correct behavior. When ‘we conform because we believe that other’s interpretation of an ambiguous situation is more accurate than ours and will help us choose an appropriate course of action,’ it is informational social influence.”

My concern is that because of humanities innate desire to be liked, people are creating content, apps, videos, and information based on what they perceive others will approve. In doing so they are rewarded with more likes and more shares. We already know that social media is addictive. A study released by non-profit Anxiety UK found that forty-five percent of responders said they feel “worried or uncomfortable” when email and Facebook are inaccessible. We also know that Dopamine, the same chemical released by our bodies from food, sex and cocaine, is also released from Facebook. Is it possible that the social influence of today’s gamified social media is having a bigger impact on us as individuals than we might perceive?

The interview of Jeremy Keith was like a drink of fresh lemonade on a hot summers day. It cleared my mind and reminded me how unique of a time it is to live in this age of connectivity. An age where anybody can build apps, launch blogs, and write content. As global participants in this shared community we need to be aware of the impact we make as individuals. We need to build apps that encourage unique creativity and we need to be intentional in creating content that reflects us, not those around us. It’s as simple as that. I hope to get a conversation started.

Talking to my brother about the impact technology plays on the norms of social behaviour. Among other things, he had this to say.

“When you bring in a change that effects our way of life the behaviours that were standard to us are going to change. And ya, we’ve lived that way for hundreds or thousands of years. In that our tradition was to make eye-contact, talk to people face-to-face, and build relationship like that. And changing that is scary for us.

But this is not the first time that our life-style was changed like this. For instance automotive transportation and air transportation were very scary when they first came out. Before humans had travelled 90miles per hour, there were theories that people would die if they travelled that fast.

And maybe they were right, now that I think about it.

There isn’t much of a question, that there wasn’t an unforeseen side effect. In that the change of the way of life would destroy our environment.”
~ Craig Whiting