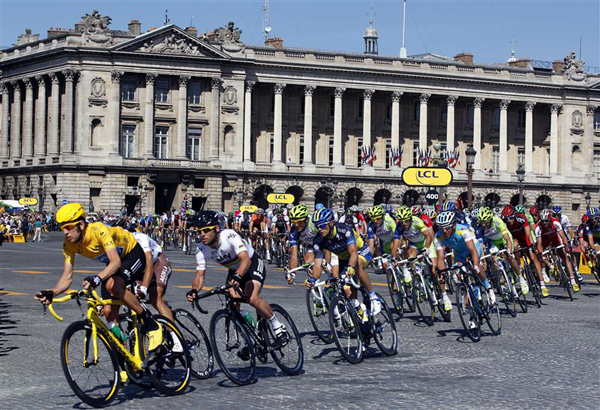 In 2012 British cycling amazed the world by claiming the prestigious Tour de France and 70% of the Olympic cycling podiums. Never before had an English rider won the Tour de France nor had their cyclists performed so well in the Olympics.

At the heart of British cycling is Dave Brailsford. He and his team around him set an ambitious goal. They proclaimed that they would have a British cyclist win the Tour de France in just 5 years of creating the new Team Sky.

What followed was an onslaught of criticism and disbelief. Every serious cycling publication was doubtful that this could be achieved. After a disappointing first season Sports Journalist Richard Williams of The Guardian wrote, “There is no denying that large slices of humble pie have been forced down the throats of a brand new team.” [1]

By the start of the 2012 Tour de France Dave Brailsford said, “We might have come across a bit arrogant at the time, which I regret massively. But we did say the aim of the team was that we wanted to go out and try to win the tour in five years with a clean British rider. Here we are indeed with a third attempt and we’re one of the race favourites.”

What happened in those 3 years? How did British cycling Team Sky achieve this amazing accomplishment in spite of the disappointments, criticisms and setbacks?

Dave Brailsford says that to achieve change, or as in this case, to accomplish something you’ve never done before, you must have 3 things in place. He calls this the Triangle of Change and when things didn’t go as planned he would remind his coaching staff and team about it. That triangle includes three components:

1. Psychology: You must believe that you can achieve it.

2. Commitment: You must be 100% committed to the process.

3. Suffering/Reward: You must be willing to suffer to get there and the reward needs to be greater than the pain of the suffering.

It’s really a simple model and it applies in business as well as in sport. Steve Jobs famously stated, “You have to have a lot of passion for what you are doing because it is so hard… if you don’t any rational person would give up.”[2]

In the cycling documentary “British Cycling Road To Glory” Dave Brailsford drew this triangle on the board. After Wiggins did worse than expected in 2010 the team was desperate to know what they could do to help.

The commitment was there and so was the willingness to suffer. In the words of Brailford, “For Bradley in particular, boy oh boy was he suffering.”[3]

What remained was the psychology of the athletes and in particular, the psychology of team leader Bradley. “After 2009 I didn’t really believe I could win the Tour. I thought, ‘That’s for someone else, kids from Kilburn don’t win the Tour.'” Wiggins told the Guardian in a 2012 interview.[4] Sport pyschologist Steve Peters was key in helping the Sky riders to conquer their doubt and assess their beliefs.

By reevaluating the team’s health in each of these three areas, Team Sky coaching staff was able to support their riders where they needed it the most. In doing so they maintained the level of excellence they required to eventually do the impossible and win the tour – not once but, as of now, three times.

There is a powerful principle here that applies to any team attempting to undertake the improbable. When I first watched the film, British Cycling Road To Glory, I was struck by how intuitive the points made by Dave Brailford were. Yet, within our own team we had struggled at different times with any one of the Triangle’s components.

Motivation comes from within. I for one have made the mistake that it is my job to motivate my team. Fortunately, it is not. When a new member joins the team they are hungry to succeed. They want to impress others and are very motivated. Sometimes it’s the interactions with their managers that demotivate them. It’s not very often that someone joins a team thinking, “I want to be the worst employee these guys have ever seen.” Motivation is at the core an intrinsic thing.

Most people, I believe, innately understand the need for commitment when pursuing a goal. But just as Team Sky experienced, commitment alone won’t bring about the change you wish to see. According to the Triangle of Change, one also needs to believe that they can achieve what it is they are trying to do. Finally, they need to be willing to suffer to achieve a reward that matters to them.

When one thinks about it, it’s logical. I often go on training rides with my father. He’s in excellent shape. It can be surprising how fast he attacks hills on his bicycle. I know that I can keep up with him on these climbs. Or at least I believe that I can. So even when I’m a bit out of shape I will push myself to keep up with him. I find myself doing this even when it hurts and I’m not sure I have the strength or fitness to maintain the pace. Belief is a powerful force, it quiets the doubt inside.

Five years ago my brother and his business partner were founding a tech company. Neither had a web background and they needed a technical personal so they invited me to join as the 3rd founder. I had a web design company called Crayons+Walls at the time. It was doing well, but the thought of building a start up was more exciting.

Ideas bounced from Steve, Art and I quickly. Soon we had a dream board with over 10 good start up ideas. We were going to knock them off one-by-one. All of us were committed to growing this company. However, while we were all committed, not all of us believed it was possible. As the first year passed without much reward, the desire to work late nights and suffer began to be affected as well. The lack of belief showed up in how we as leaders tackled our individual tasks.

I’ve learned that partnering in business is like marriage. You can grow a lot individually but the partnership (or company) can only grow as fast as everyone collectively. Today we all believe in the direction that we are going (and that it is achievable), but it has taken many years to get to this point.

Finally, and crucially, you must have a reward in place. When I ran my web design firm Crayons+Walls I would work evenings and weekends to complete projects for my clients on time or ahead of schedule. The reason is that I got the final payment upon completion. It was the reward that made the pain of working long hours worthwhile.

Rewards look different depending on the person and job required. For many the joy of the task is its own reward. I’ve learned that celebrating minor milestones is crucial to a team’s moral (and my own). One of my mentors described how business became fun when he setup Key Performance Metrics. The reason was that he implemented a method that he could track performance and got an intrinsic sense of reward when he saw improvement.

The best cycling teams celebrate collectively when they get their leader in the top 20 rankings, top 10 finishes or standing on the podium. This encourages the team as they improve and it reinforces their commitment and the belief that winning is possible.

Alternatively, sometimes the result of “1st place” never happens because their weren’t enough rewards along the way. After a while, suffering becomes unbearable. Rewards, therefore, reinforce the psychological belief, “I believe I can do it and it is worth it”.

Legendary NHL hockey player Ryan Walters is famous for his expression “Staying above the line.” It’s an expression that means to keep ones mindset and team’s moral positive. He further says, if you want to achieve an ambitious goal focus on the process, not the outcome. What Ryan Walters and Dave Brailsford would advise is to spend your mental energy in the same place that you desire your venture to go. Spend it in thinking of what it will take to achieve a better future and it won’t be long before you do.

“Greatness and nearsightedness are incompatible. Meaningful achievement depends on lifting one’s sights and pushing toward the horizon.” Daniel H. Pink, from his book “Drive: The Surprising Truth About What Motivates Us”.