Recently I’ve become fascinated by the story of Honda’s CB500 and CB550, having recently acquired one. Read reviews and road tests of either bike and you see a statements like Motorcycle Mechanics “one of the ‘show stealers'”, or Motorcyclist magazine’s “possibly the best all-around street bike on the market.” 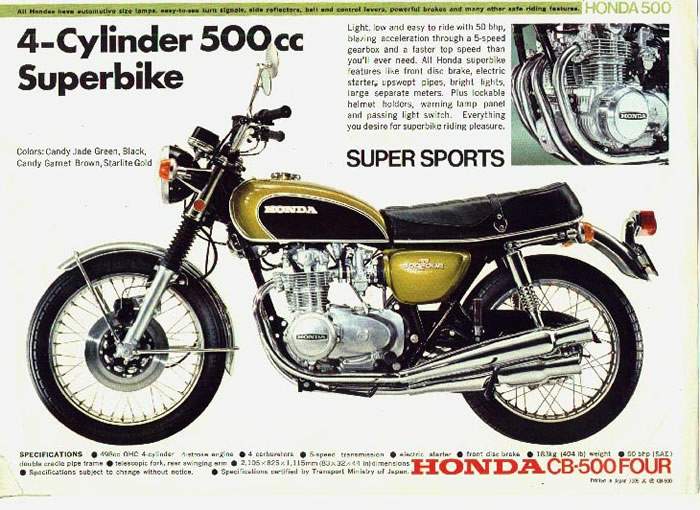 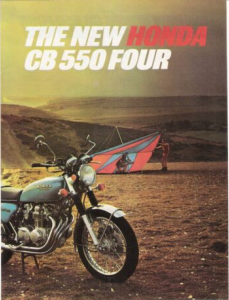 Yet, while the story of the CB750 is well known, Honda’s 500cc series remains largely unassuming, almost exotic, except to motorcycling enthusiasts and those that remember it from the days of their youth.

Wipe away the dust and an intriguing past emerges.

The saga of this bike starts in the 1940s. An era whilst European motorcycles were leading the world when it came to performance. British and Italian bikes like Norton and Moto Guzzi were dominating The Isle of Man TT race, the most prestigious motorcycle race in the world [1]. The two American brands of the time, Indian and Harley Davidson, meanwhile were building the now iconic big engined and slow revving steads.

Then came the seventies. Marked by the quintessential sports cars, classic sport bikes, fast-living rock stars and legendary guitar solos. While rock’n roll was moving motorcycle innovation wasn’t. Fast forward half a century to modern days and it’s hard to imagine a time when companies weren’t innovating products at a relentless speed. We’re surrounded by tech centric companies. In the pre-personal computing age however, this was far from common.

When the young company Honda emerged in 1946 with the long and official name of Honda Technical Research Institute it was clear that engineering would be its DNA. Japan has a deep-rooted history of excellence in craftsmanship. Samurai swords like the fabled Katana blades were folded up to 10 times by smith workers removing impurities and forming thousands of layers of metal bonded together. In Japan there exists a culture that looks for perfection in the harmony of the parts that make up the whole. In other words, a machine must be designed to work in harmony with itself to perform most efficiently. And founder Soichiro Honda was gripped by this and desired to engineer the perfect machine.

And a Honda 500 series motorcycle engine seems to exemplify this.

“First, there was its bloodline. If you were a racing fan of – and particularly a fan of Mike Hailwood and his screaming red-and-silver Honda GP bikes – there was a certain amount of magic in that half-litre displacement. Real GPs were 500s, and the displacement had a lean competition ring to it.” 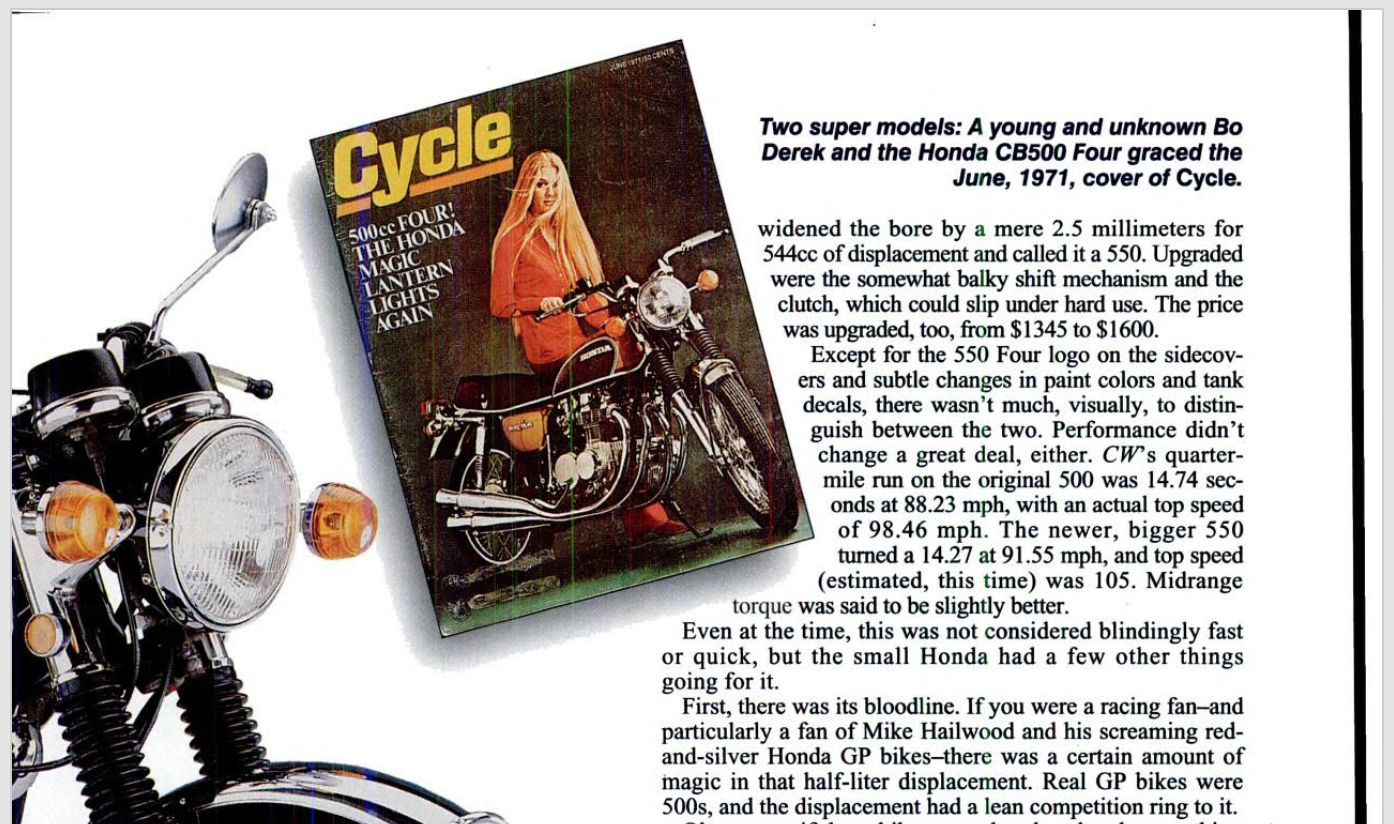 Honda released the 500 in the early 1970s, “Injecting a massive dose of technical class and good motorcycling into a rather ordinary collection of mid­sized street bikes.” Exclaimed Cycle Magazine.

Almost as quickly as they left the factory floor in Japan the CB500s and 550s were being modified as cafe racers or gentleman’s expresses. Cycle World recorded that the, “Good looks and good handling made the 500s and 550s the darling of the cafe-racer crowd.” As if their real purpose, their calling, was competition. Fortunately, the engine was more than capable. The CB550 is easily modified to rev at 11000 plus RPM. “Several CB500 machines were entered in the Production TT races on the Isle of Man in the early 1970s.” Bill Smith road the CB500 to victory in 1973 – 8.2 seconds ahead of his rival. [1]

When the young company Honda emerged, the Isle of Man was clearly on everybody’s mind. Founded by Soichiro Honda and Takeo Fujisawa in the late 40s. Honda made its first appearance at the Isle of Man in 1959. Then in 1961, just over a decade since their formation, they won the first 5 positions in each of the 125cc and 250cc categories. An unprecedented rate of success and a sign of what was to come.

Soichiro Honda was inspired by racing and passionate about engineering. Honda believed racing was the springboard to technological advancements [2]. He is cited as saying, “If Honda does not race, there is no Honda.” [3] In their formative year, Takeo Fujisawa joined Soichiro Honda, handling the companies business matters. Honda was able to spend his days in the factory and research laboratory.

With race engineering driving their designs and finding their way into production, their engines became better and more reliable [4]. Honda’s began upsetting the status quo. “They were built like a fine watch. Incredibly durable, fun to ride.” Selling his Norton for a Honda, Peter Egan, Editor-at-Large of Cycle World shared, “When I got the Honda all of a sudden I felt I could look at the map of the United States and go anywhere.”

Brooklyn Dodgers manager Walter “Smokey” Alston road a Honda. As did Steve McQueen – a man known for his riding abilities.

“[Soichiro] Honda was the kind of guy where the engine was the heart of everything,” shared Thomas Elliot, then Executive Vice President of Honda U.S.

And Honda was winning races in the Grand Prix on an inline four 500cc engine. That was until the Grand Prix brought in new rules restricting all classes to six gears and most to two cylinders (four cylinders in the case of the 350 cc and 500 cc classes), Honda joined a mass walkout and didn’t enter the Grand Prix again for the next ten years. 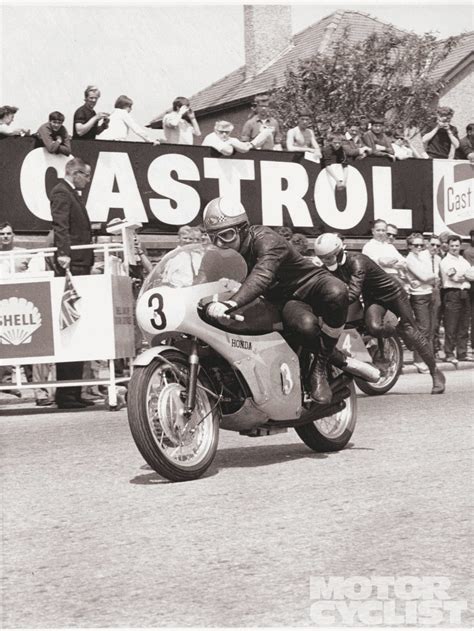 Clearly, however it was Honda and they had plans of one day returning.

The 500cc engine was the king of the GP. And Honda, passionate about innovating a race machine, didn’t have a 500cc inline four engine to develop in their model range.

Yoshimura an engineer, who lead Honda back to their return to the GP in 1979, was a staunch advocate of the four-cycle approach. “Four-stroke engines,” he said, “have distinctive mechanical processes. The (intake) valve closes tight, combustion occurs, the exhaust valve opens, and the exhaust is released. It’s a sequence of independent processes, each with a different function, working together to facilitate the engine’s entire operation. This is really fascinating, from an engineering standpoint. I believe this mechanism will be the basis of further advancement in engine technology.”

Yoshimura joined Honda in 1972 and was determined, “to create something that would represent the very best in technology. We were determined to create an engine to surprise the whole world.”

The CB500, with a top speed of 115 mph [6], was already a great bike and was well received by reviewers. Cycle Magazine called it, “The thinking man’s motorcycle.” So it was unexpected when in 1973 when Honda released the upgraded 550cc engine. It was the same frame with the same classic sport styling, same tank design, similar weight, same engine case, but with a larger displacement engine.

But the surprise was appreciated. 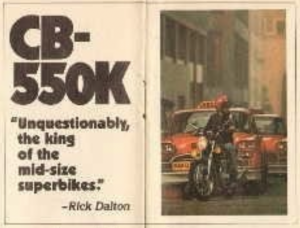 But engine size wasn’t the only thing upgraded. Honda’s racing and engineering fingerprints were evident on the CB550. The front forks and hub were designed for bolt on dual discs, stock. Something early adopters of the CB550 made quick use of. And there were other, less evident, improvements as well. Such as an improved clutch and uprated rear suspension [5].

Peter Watson and Graham Sanderson of Bike Magazine wrote, “We believe the CB550 provides one of the finest balances between performance, economy, and handling quality in today’s motorcycling arena. That may sound like a tribute normally reserved for two-grand plus machines, but we thoroughly enjoyed the CB550 and consider it to be one of the better bikes to emerge from Honda’s design team in recent years.”

“They embraced a kind of architectural classicism that paid tribute to both British and Italian design, with just enough Honda thrown in to reassure those who hated walking”
~ Cycle World in reference to the CB500 and CB550

It’s interesting when you consider that the CB500-550 series lasted between 1971 to 1978. Ending the year before Honda returned to the Grand Prix circuit.

The 500 series soul is its engine. Its beauty is its classicism. Its charm is its faithfulness. And its legacy is its timelessness.

Honda’s spirit was in engineering and advancing the engine. The 500cc was the pinnacle of Grand Prix racing. Perhaps, without the rigorous racing of the GP, Honda needed another way to test and develop their 500cc “heart” that would eventually see them return to the Grand Prix and their roots.

“A machine that has earned a reputation for sporty performance, precision handling and virtually faultless reliability.”