Years ago I cycled a Gran Fondo from Coldstream to Arrow Lake. The route took us over the Monashee pass. A mountain range connecting the West Kootenays with the Southern Interior of British Columbia Canada. Passing the sign on a bicycle, I remember how cool it felt seeing that we were at the summit. I had no idea that years later I would be backcountry skiing mountains just minutes from that sign.

And one word summed up the feeling of this trip. Gratitude.

We were based in Keefer Lake Lodge, a cat skiing resort, situated in the heart of the Monashees. The lodge sits in a valley surrounded by mountains on all sides.

Staying with about 20 other guests we were split into 2 parties. I knew a few of the people there, but the majority I was meeting for the first time.

In the morning we rose, did a brief avalanche safety course, and climbed into the Snow Cats as we set off for the slopes.

Everyone partnered up. My brother and I have skied together lots. So we rode together. With hoots and hollering we descended the first run.

Each trip up the Cat gave a chance to chat with fellow riders. Slowly getting to learn interesting stories about each of them. They were all solid skiers and snowboarders. By the days end we headed back to the lodge. Our legs worked, and hearts full.

Keefer Lake Lodge had a private chef and made us feel like kings and queens. We sat down to roast elk, buttery lobster, and delicious desserts.

That evening one of the skiers, Mike Shaw, shared his story. It was powerful.

He was a pro skier, turned freestyle ski coach, who had trained 2 of the skiers competing in the 2022 Winter Olympics. Then while hitting a jump – everything changed. He shared a photo of himself standing with his arms around 4 pro athletes.

That was the last last photo of him standing.

They removed 4 or 5 of the back bones in his spine and replaced them with metal pins so that his nerves would have room to swell.

He began working with physio rehab. It was a slow process. First he started with arm movement. Then slowly progressed to being helped up and out of a chair.

Yet here he was skiing with us in the backcountry.

He shared his heart, how grateful he is simply to be alive. He feels like he’s been given a second chance.

A 3 day trip, on the last morning we once again ascended the slopes in our Snow Cats. I observed how Mike skied. Despite the challenges he faced, he flowed with grace and ease. I never would have known had he not shared his story.

Still very much in rehabilitation, it turns out that he hasn’t hit a single jump since his injury. That was until this trip. With an abundance of playful features available it was impossible to turn them all down. I noticed Mike sizing some up. And carefully approaching one before finding his balance and sending some air. He landed gracefully, like a cat, and I could see him building confidence.

There are so many ridges available in this range, that we were taken to a new one each time. One of the mountain lines we dropped into on the last day took the cake. As we stood above the drop in, the slope dropped off quick, you couldn’t see what you were lining up for.

The guide called my name and it was time to send it. Everything clicked and I felt that surreal presence that comes when your body connects in harmony with the elements.

There was a moment after that line when we all sat down waiting for the Snow Cat. It may have been right then, it may have been later in the afternoon, I can’t remember. What I do remember was feeling a tremendous sense of gratitude. And I could see it in the faces of my companions. They felt it too. We all felt it.

Mike shared with me later that being grateful was his secret weapon for recovery. It got him out of depression. “We can all go from surviving to thriving, choosing gratitude and our full effort. When you take control of your mind, it’s incredible what you will achieve.”

Then something magical happened.

At the end of the day, we climbed one of the mountains for what I thought would be a run. But the guides had a different idea. We were joined by another Snow Cat at the summit and the 2 of the machines began pushing snow and building a kicker in the middle of the backcountry.

My heart skipped a beat. From fear. We were going to hit this?

A backcountry booter was a first for many of us. An experience I didn’t think I would ever have. Leaving the park days behind me a decade ago. It blew my mind that we were about to do this.

Then it was time to hit the jump. Inspired by Mike, who was leaving his limits at the door, I hit the kicker and launched a 360. There was plenty of time as I floated suspended in the air, spotted my landing, and felt the pillow snow beneath my skis. Euphoria filled my soul.

We climbed back into the Snow Cat and lined up again. Dan Martel sent a huge backflip. Mike Shaw did a beautiful grap. Stephen, my brother, who also broke his back skiing (another story for another day) soared through the air. We all left our limits at the door.

Then for my last jump of the day I went for it with an iron cross. Simply to see how big I could go. I never measured the distance. But the feeling of flying was unbelievable.

And the landing? It was like butter on the skis.

This was a trip for the books and one for the soul.

“Gratitude makes sense of our past, brings peace for today, and creates a vision for tomorrow.”
~ Melody Beattie

To celebrate I am giving away a book. Not just any book, this is actually my favorite book on business. Growing a Business by Paul Hawken. 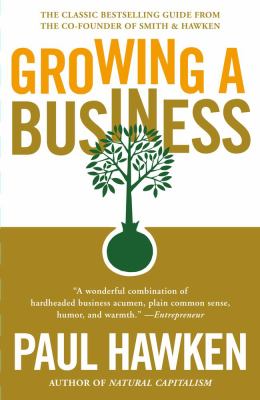 I first read this book after having closed shop of Saint Clothing. I had just graduated with my degree and was looking at starting a new venture with my now business partners. This book was extremely encouraging and helpful. It lays out such simple and useful strategies on how to grow a business from the ground up.

After having read many books on business since then, this one remains my favorite.

Okay, so how can you win it? Easy, just make a comment on any of the posts on this blog and you are automatically entered. It will be a random draw and I will announce it here on Machiine.com October 24, the one year birthday of Machiine.

Again, a big thanks for reading this blog and encouraging me to keep writing posts with your visits.

This is an old video already, but it is still one of my favorites. And just in the off chance you haven’t seen it already, here it is. This is my favorite bike video. I love the filming, music and raw style of MacAskill.

I thought it would be fun to post random videos and things I find interesting about machines on this blog every weekend. This one is pretty cool. I think lego and rubiks cubes are two of the best inventions ever and putting them together is even better. So here’s my first “weekend special”, it’s a video I came across on Youtube.