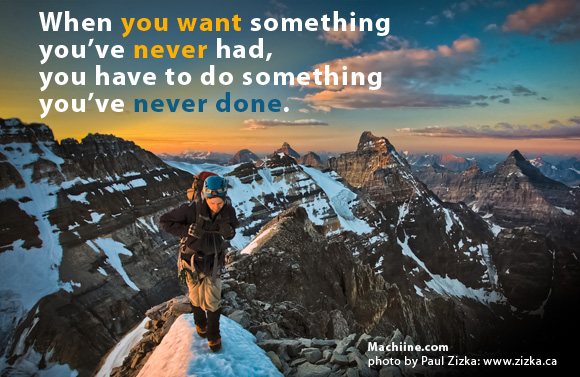 It is no secret that keeping ones focus in business is challenging. I’ve found this especially true in a startup. That uncertain phase after you’ve got a few early adopters and now are going after the early majority. It can be tough crossing that chasm. Customers went from liking your product because it was new, to now being a bit skeptical and reluctant because… it’s new. V973KE5R5TCC

Now comes the challenge. You’ve got a few early adopters, but are having a tough time convincing new customers. The work is getting harder. And you’ve just discovered a really good opportunity in another market (or so you believe).

There is always a point where another idea looks better than your existing one. Or a new market looks better, maybe it appears to be more penetrable, or it has a larger segment of early adopters. The temptation to pivot is really strong. We’ve been told pivoting is how we discover our business model right?

Stop right there. I need to tell myself this as much as anybody else. After pivoting (when things get tough again) in 3-6 months, you will have encountered another really exciting opportunity. The early adopters are using your product but you are again having a hard time getting the early majority and the temptation to pivot will appear again. This is a cycle you don’t want to find yourself on. It’s a really easy way to waste 12-24 months of your time that could have been spent focusing your attention on one market segment and discovering the decision points of the early majority.

Steve Jobs said in Business Week February 2006, “I’m as proud of what we don’t do as I am of what we do.” The key to maintaining your focus is learning to say no to really exciting opportunities. And it’s hard, really hard. But 24 months later you will see that saying no was one of the best decisions of your life.