The restoration – A background.

I remember it like it was yesterday. It was a bright sunny morning and I had just gotten a phone call from my friend Ryan, “You’ve got to come quick … there’s another guy that really wants this bike.”

The bike was a $5 Benotto at Ryan’s garage sale. It was a killer deal. Granted this was 10 years ago and the love of all things classic hadn’t yet come into vogue.

Bikes have somehow been involved with all the big milestones in my life. One of my earliest memories is of my dad surprising me with my first bike. He had worked in the garage fixing up and painting it. My family moved countries when I was 8. That was when I sold my then red 6 speed bike. It was the most precious belonging I had. Selling it was a big deal for me – bigger than moving countries. My parents were perhaps aware of this. They let me sell the bike myself, barter for a fair price, and then throw in my lock because I liked the kid.

Later at the iconic age of 16 I got my first “real” mountain bike. It was a Giant ATX 870. Our family had moved again (we moved around a bit growing up – which may explain my nomadic inclinations). Shortly after arriving in the new town I got this beautiful machine. It was my pride and joy. I liked that it was a hard-tail and I liked that it was a bit more technical to ride down some trails. I took care learning to do drops and my first gap jump. I never dropped the bike, never crashed, or endoed. It was the perfect bike for me. Then it was stolen.

The next day my dad called to let me know he saw a guy riding downtown on a bike that looked identical. But the guy disappeared and that was the last time I ever heard about it.

I learned a valuable lesson. If you value something – look after it. Instead of looking after this bike I had left it behind a friends house because I didn’t want to bike back up the hill home. That’s where it was stolen.

Skipping a few years and I’ve been without a bike for about 3 years. That was when my friend Ryan called. He knew that I had been looking for a road bike and a family member had donated this bike for his garage sale. So I headed over there and closed the $5 deal.

For me this Benotto represented more than a bike. It felt like a gift from God. It was just what I needed that summer.

It was late spring when I picked up the bike and the weather was warming up. That bike became my primary mode of transportation. In those days I was working on a construction site. I would bike to the job site early in the morning, work through the day, and then ride back through the town, cross the bridge and then up the long steady hill climb home. The Benotto took me on weekend adventures, peddling up the roads with friends to explore and climb nearby mountains.

I didn’t know anything about the bike, all I knew was that I loved the way it was to ride.

Earlier that year I had helped out briefly at a local bike shop as a bike mechanic. As the shop was on my route home I swung by to give the bike a tune up. It was the guys there that let me know just how special the Benotto was – and how rare it was to find. Apparently Benotto was one of the best bike makers in the world from 1930s to the 1980s. Benotto team riders lead the world’s cycling scene in the 1960s to 80s – breaking records and winning races.

This was all news to me. I liked the frame and had sprayed it black right after getting it. Later converting it to a single speed and using it as my town commuter. Turns out this was a mistake. Benottos are like the holy grail – not to be tampered with.

This faithful bike has been with me now for about 10 years, through thick and thin, rain or shin, and I feel it deserves a new life – one fitting of the Benotto name.

So this week I’ve started the restoration. It proved really challenging to identify the model and year having removed all decals when I first got it (I did leave the front decal). Despite its legendary status there is surprisingly very little information available about the Benotto. I’ve tried to document what I’ve learned as I go and share that with the world on this site. You can learn more about the history of Benotto here.

First the dismantling. This is the fun part. Stripping off all the parts revealed some really nice brazing in the bottom bracket.

You can see the original gold/champagne colour remained hidden beneath some of the parts. 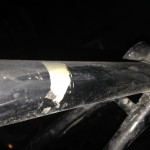 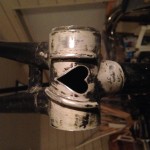 The quality of a Benotto bicycle can be seen everywhere. Here are the cast rear wheel dropouts. 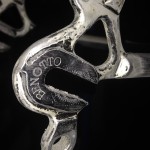 As the black paint is removed, more quality craftsmanship is revealed. Here you can see the nicely built seat stays. 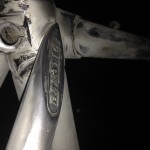 Then tragedy strikes. I accidentally broke one of the cable guides on the top tube with my bike stand’s clamp. Was hoping to braze it back in place, but it’s broken into 3 pieces. Not sure what I will do. Might grind off all the cable guides and replace them with new ones. Or I use the old fashioned cable guides. Will see what comes to mind tomorrow.

Part 2 – How to identify a Benotto frame